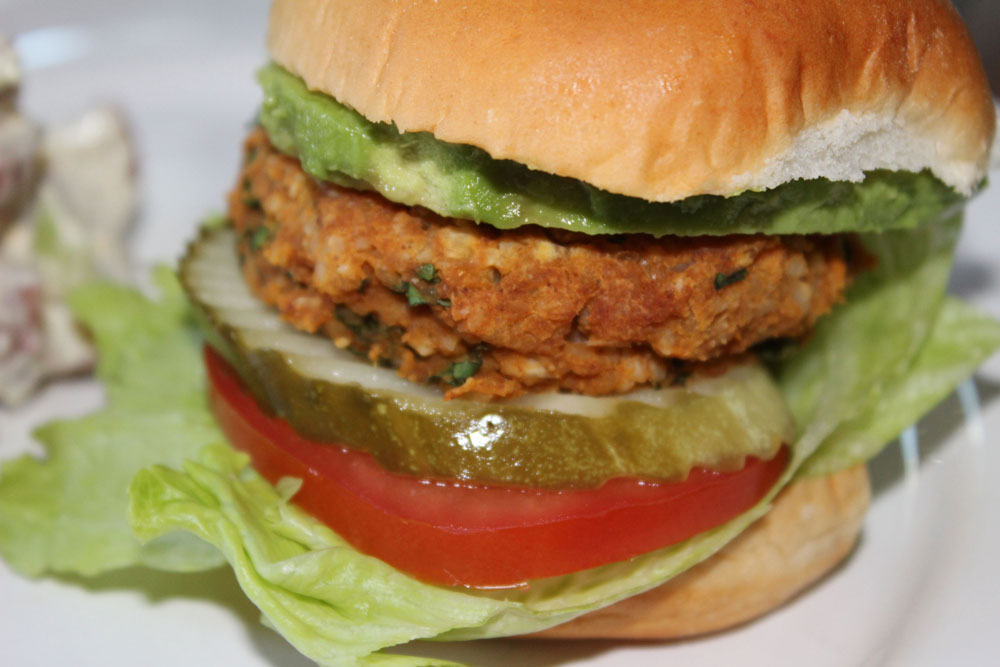 Fall and football season present a great opportunity to get together with friends to watch the games and try out a new veggie burger recipe! I have to admit that because of the Cowboys trade to the Eagles this season, I bought my husband and my kids a #29 Eagles jersey with “our” name on the back. If you know what I’m talking about, tweet me a link to your favorite game-day recipe (@KateMurrayPA) and I just might give you a social media shout out! I actually tested this recipe by bringing a tray of 14 to a recent party. I thought I would be bringing at least half of the “burgers” home (to eat as leftovers the next day). I was wrong! All of them disappeared, and then people began asking for the recipe. That’s when you know you hit a home run! (Or perhaps I should say, “scored a touchdown” since it’s football season!) The sauce is the same recipe that I use on my cauliflower poppers (published 9-9-15, find it online at Reading Eagle Berks Country), so it’s likely one batch of sauce will work for both of these recipes.

Serve your veggie burgers on a whole grain roll for the biggest health benefit, or if you have children or picky eaters, try it on a simple hamburger slider roll.

1. Wash well, then poke a few holes in the sweet potato with a fork and cook in the microwave for about 7-8 minutes.
2. In a food processor, process the cashews until they are a fine powder. Do not process too much or they will became nut butter. Add the chick peas, sweet potato (remove skin) and rice, then process just until chunky (not creamy).
3. Sautee the red onion in broth for about 10 minutes over medium heat.
4. Add half of the onion and the blender ingredients to a mixing bowl. (Save the other half for the bbq sauce). Fold together with the chopped raw kale, add about 1/4 cup of bbq sauce and add a pinch of salt and pepper.
5. Bake at 375 degrees for about 15 minutes.

BBQ Sauce
1/2 red onion
3/4 cup vegetable broth
1/2 cup ketchup (I like Hunts because it contains no artificial ingredients)
2 tbsp. maple syrup
2 tbsp. brown sugar (or you can substitute 2 mejool dates)
2 tbsp. mustard (yellow)
Saute over medium heat for about 10 minutes until thick. For a creamy consistency, process in a high speed blender.